I do agree about the underside that it isn't the best looking - it is basically the same since the very first models and there weren't any improvements on the looks of the underside. The technology we use has a bit raw look on the underside and working on some updates for the future. At this moment giving our best to follow up with the request and sorting out the production and production related problems (materials, logistics etc., everything is a pure confusion for the past two seasons)

And to return back to the real topic, here is what I ride now:

Had some parts at home, Sram Red levers with the broken shifting on the left lever, so I decided to try out 1x11. Put out the mechanism, took an Apex rear derailleur

and restored Clavicula crankset with 46 chainring and on the rear I have 11-42. I moved a few years ago on a top of a hill so my priority was to get an easy gear to get home

(average climb is 11% to get home, and not the best way to end a ride with the last 3km like that). Sometimes I change the rear cassette with 11-36, depends on where I ride. Please forgive me the seatpost clamp - I often put the bike in my car and need to put it apart, it just makes my life easier

I'll later build a ww disc bike, that one ended at 7.2kg as on photo, but still quite good with heavy wheelset and ALU Ritchey stem and handlebar.

Took me quite some time to somehow make the step to disc brakes. I do have my old rim brake bike, but "had to" make a disc brake bike if I ever want to really test a wheelset with disc brakes. I came quite far with the development on the wheelset, but didn't made yet the step to focus on it and to make a production, so we'll see what the future will bring...at some point I decided that I need to ride more, and not only work, like I did for most years since I quit racing and focused 110% on the compnay.

It took quite some time to somehow settle down. In February I also had some health issues (appendix) which put me in the hospital for quite some time, previously also had a burn out a few years back and I managed to slow down a bit since then. So now I'm happy to be back on my bike a bit more, need to lose some weight and I'll be back on track

I already mentioned - we also managed to make a monocoque disc brake frameset which was posted on the previous pages:

Not 100% sure if we will continue that way at the company, but we'll see, it is a strange time to plan things since the demand is not realistic (at least as far as I see what is going in the industry) and not putting big hopes into framebuilding.

Loveley! I must say that the service I've had when just buying small things such as saddles is amazing. Thank you!
Last edited by handler on Sat Nov 20, 2021 10:36 pm, edited 1 time in total.
Top

Berk wrote: ↑
Wed Nov 17, 2021 8:31 am
@mrlobber
Yes you are correct, we put 5Nm for safety reasons because some seatpost clamps can cut/damage the saddle rails. If the saddle rails are compressed from both sides at the same area (or clamps like the SL6, Ritchey 1-bolt etc.) it is no problem to use up to 12Nm.

We used to produce round saddle rails till 2017. Some are still around, and those were for max. 85kg riders only. Only a few were custom made on request after 2017, we produce since then all saddle rails in oval 7x9mm, in some cases on special request also 7x10mm for Trek users.

Thanks for the clarification! I've torqued it up to 10Nm now and feel a lot more confident about it.

I got the 7x9mm List from starbike. Absolutely loving the saddle so far. Had I known you offer 7x10 on special request, I would have gone for that, simply because Trek's 7x9 clamps are silver and somewhat ruin the look of my bike.
Top

You messaged me over a month ago to say my saddle/seatpost combo would be ready the following week.. since then I've heard nothing and chased via email and IG... just wondering if there was any news of you hiring someone to help stay on top of all your customer care? As otherwise you are in danger of destroying all the good will you accumulated by people like myself not knowing where they stand...

Hi, sorry for my late answer, emailed recently regarding your custom cobo which will be shipped, thanks for your understanding!
We did had some virus related problems (3 team members got the virus although vaccinated) but luckily everything ok
http://www.berk-composites.com/
Top

Berk wrote: ↑
Sat Dec 04, 2021 7:29 pm
Hi, sorry for my late answer, emailed recently regarding your custom cobo which will be shipped, thanks for your understanding!
We did had some virus related problems (3 team members got the virus although vaccinated) but luckily everything ok

Got it, thank you so much! Will post pics here when the bike is built as will be pretty special

Hi everyone,
I'm currently running the 150mm padded lupina and I'm thinking of switching to the unpadded gloss model for looks and weight.
Has anyone made this switch?
I'm worried about it being slippery or uncomfortable.
Top

From my experience,...Not slippery at all, not even uncomfortable.
Although my unpadded Lupina is not glossy.
I like 'em both.

I have two unpadded Lupina's. One is Gloosy 3K pattern and the other is matt unidirectional. Neither is slippery.
Top

I had my Lupina mounted on my Darimo t1 loop at 3nm according to my torque wrench.
I noticed my rails are slightly curved.
Has this happened to anyone? Is it safe to ride? 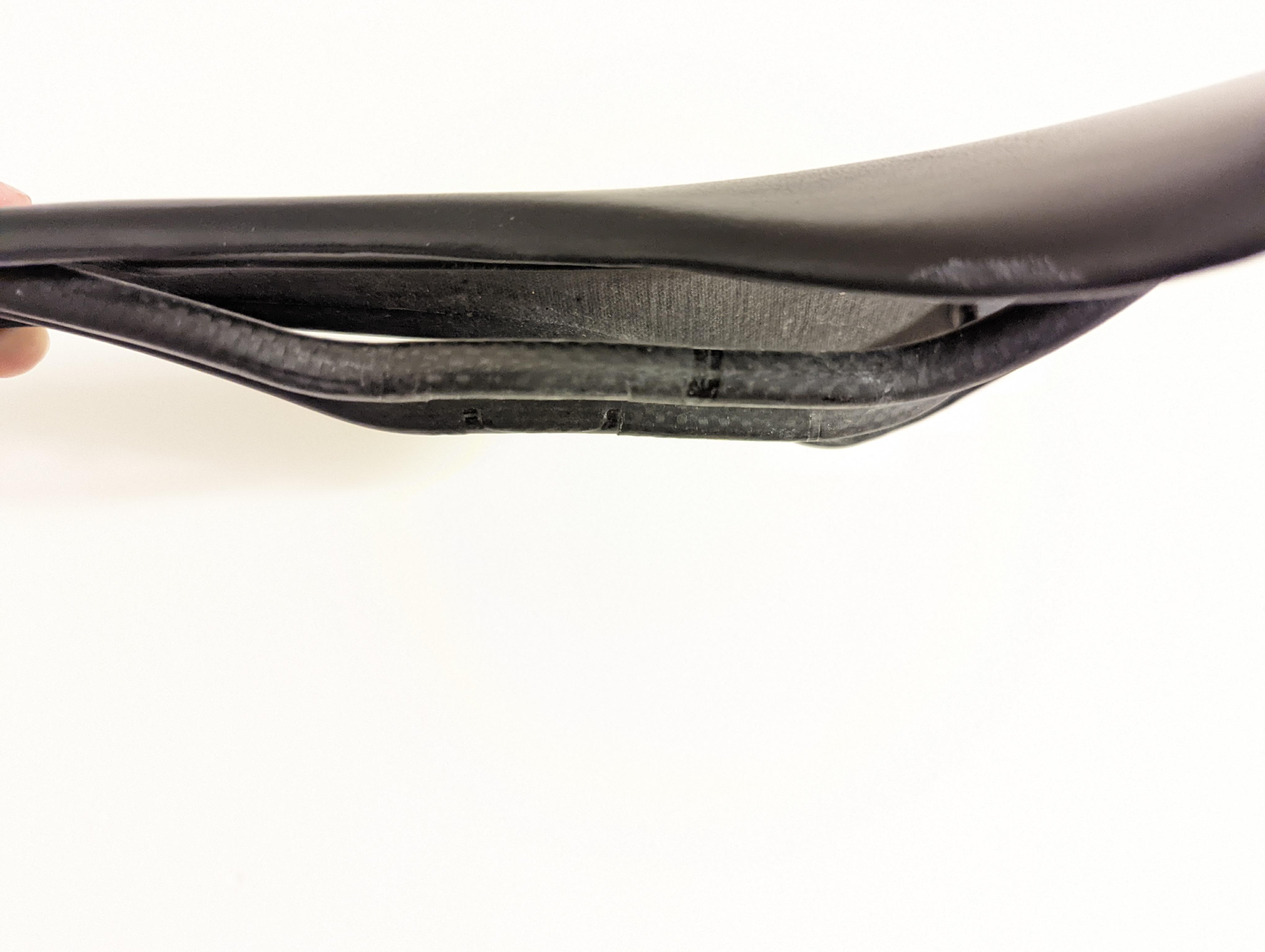 Hi,
it is not normal, already on the lower part of the rails it can be seen that the clamp has "eaten" in it, already wrote to you directly
Cheers
http://www.berk-composites.com/
Top

My oval rails Lupina is in the same position (as far back as possible) and on the same seatpost. This obviously causes more torque, with a higher chance to damage the rails. After gaining some weight and planning to do so some more (but way under the limit for Lupina and T1), should I be concerned or the saddle was tested to withstand the maximum load through all available rail length?
Last edited by Klaster_1 on Tue Dec 28, 2021 5:46 pm, edited 1 time in total.
My bikes: Aethos S-Works (4.96kg), Hongfu FM079 (5.13 kg, retired) | Attached images userscript
Top

Wouldn't this kind of aft mouting on the saddle rails suggest that (A) a seatpost with greater setback is required, and (B) the weight limit might need to be variable based on how the saddle is mounted? I ask because my wife rides on an older Selle Italia saddle that has max fore and aft mounting lines on the alloy rails and the image of the clamp marks on the earlier posters saddle would be nearly a full centimeter ahead that. I would also think that the length of the saddle clamp would come into play as wouldn't a longer clamp distribute the load better along the length of the rails?
- Michael
"Solving problems you didn't know you had in ways you probably won't understand"
Top