I usually only do 'already built' threads, but this one feels like it warrants a build thread...

I've been injured lately so instead of riding I've worked through a couple of projects. The first was a simple clean-up and re-sell - a very literal 'flip' as it came and went without me even riding it. I'm just getting back to riding now, so I hope to actually get out on this one, but there is a good chance it will go up for sale almost as soon as it is finished unless the ride happens to blow me away.

I discovered the Vitus 992 whilst researching the 979s as a potential project. Once I'd seen that fork>headtube shaping (remember, this is from 1992) I was mesmerised. I found this one being advertised as 'NOS' on eBay, but the price was ridiculous. I managed to locate the shop and discuss an offer with them 'offline' (well, still very much online, but not via eBay). We agreed on a price - which was significantly more acceptable, albeit still quite high - and the deal was done.

The bike arrived today. I wouldn't call it 'NOS' in reality - I suspect it was actually a built shop display bike or something. Regardless, it definitely hasn't seen much use; and it may have never been on the road at all. For a 30-year-old bike, it's in damn good condition. I'd call it a solid 8.5/10, so I'm plenty happy: 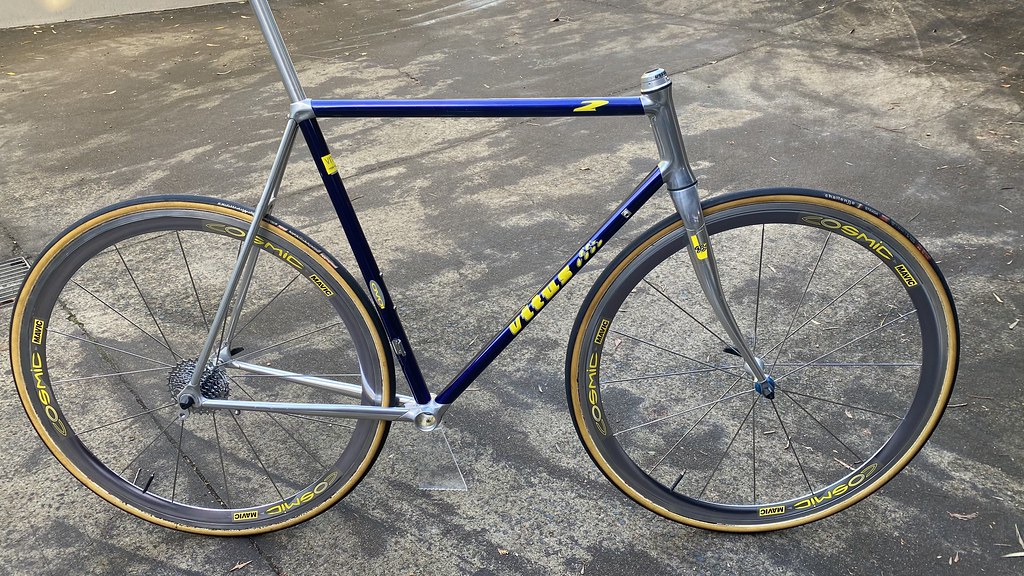 I already have replacement decals on the way to restore those that have been peeled off. I contemplated changing the mostly-yellow graphics for a different and more colourful set I found (more like the ones on this 992 on here), but I think I'm going to keep it totally original.

I got lucky with the wheels too. The previous owner told me he was given them by a female racer who only used them a handful of times, and he'd never got around to putting them to use himself. A quick polish and they look fantastic again - plus the bearings are silky smooth without a hint of play; and the brake track has a good 90% of its useful life remaining. The tyres are 25c Challenge Strada tubs.

The groupset will be Mavic with Starfish cranks. That is all already en route to me. The only change here is that I won't be using down tube shifters - I already have a set of 8spd Sachs New Success ergos ready to use, but I also have a set of Shimano Claris 8spd levers on the way (as I used on my old Klein) as those should work too, and they're the same shape as current Shimano levers for a bit of extra comfort.

The seatpost is new, but a cheap one (which also needs a good trim, due to the shaping of the tubes). This frame uses a large grub screw to hold the post in place, so whilst there are plenty of decent 25.4mm posts available, the post used in this needs to be something solid and not at all precious! To offset that, I have a NOS (genuine this time) and original Flite saddle in a dark blue colour to put on top of it.

Perhaps controversially, and despite my usual hatred of them, on this bike I plan to use a quill stem adapter and a 1-1/8" stem in silver. I think the size of the top race of the headset will pull it off more readily than a typical threaded headset; and this approach will help the bike fit me better. Bars will be the new silver Zipps - again, for a better fit as much as anything (I'd rather not use Zipp bars on a build like this, but the reach suits me perfectly). I'll probably build it this way with the Shimano levers, but also have a second setup with a quill stem and the Sachs levers taped and cabled ready to swap in if I feel like it (or if a potential buyer would prefer it to remain more authentic).

I'm excited to see how this turns out and to discover how it rides. It can't hang around long, though - the third project frameset (an immaculate '98/99 Spesh Allez Epic carbon) is already on the way too!

More to follow as the parts arrive...
My bikes over the years
Top

Looks excellent. The Cosmics are a perfect fit on this frame. This version of the Vitus decals tie in so well with the yellow graphics on the wheelset, less busy than the colourful version I have. Look forward to seeing the rest of the build!
Top

As did the replacement decals.
My bikes over the years
Top

...which turned out to be printed on white vinyl, rather than clear; and so are basically useless! Oh well.

I've contacted Cyclomondo so hopefully I'll get a set through them instead. That might mean I do get the colourful ones as they've already got those ready to go; but trying to remove some of the existing ones completely is already proving challenging, so I'd rather just patch up what is already there.

EDIT: Turns out the graphics I have aren't as popular as the coloured ones, so Cyclomondo don't have them on file. I've worked out how to clean off the old graphics, so I'm ordering a set of the coloured ones to use instead. Not perfect as I wanted to keep it completely original, but actually the coloured graphics have broader appeal, so it's a good compromise.
Last edited by RichTheRoadie on Mon May 31, 2021 12:48 am, edited 1 time in total.
My bikes over the years
Top

Sent from my M2101K6G using Tapatalk

It took another step closer with the arrival of a NOS Flite in an almost perfect shade of blue:

As did the replacement decals.

Interesting that the Mavic single pivot brakes are actually DiaCompe BRS 500 calipers. I sold a set a year or so ago.
Top

Indeed they are. I believe later brakes were made by Modolo. The levers are rebranded from other manufacturers too.

Here's the latest - quick polish of the lugs (literally a wipe-over with some metal polish), removed the old decals ready for the new set to land (hopefully tomorrow), bottle cages on, and the ahead adaptor with polished silver stem which shows how well the bike carries that off: 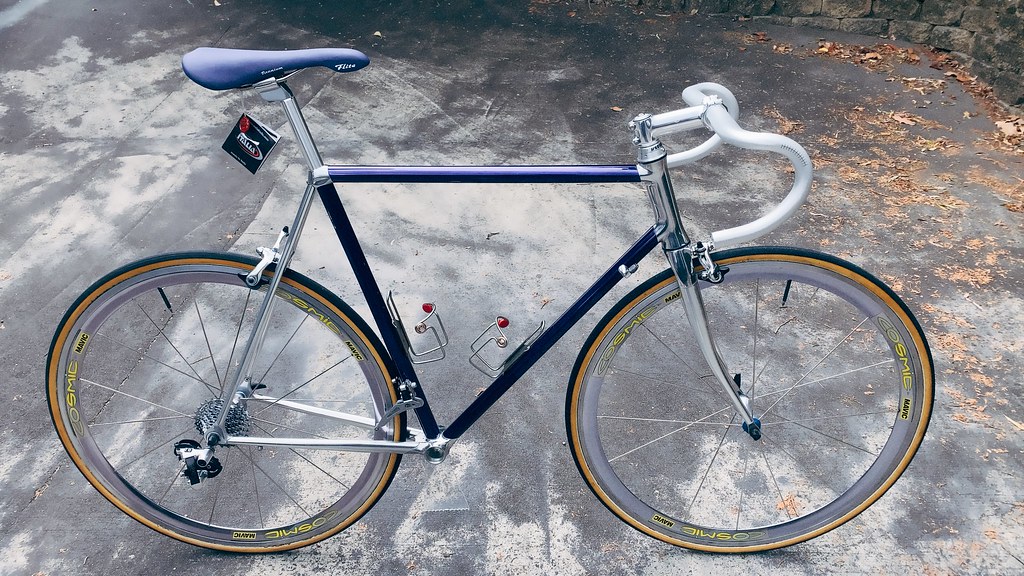 Very torn on this, though - it's still yet to be ridden, and the next project is coming up. I want to put the same kit on that, so this might get sold as a frameset, seatpost and saddle before even I get to ride it... 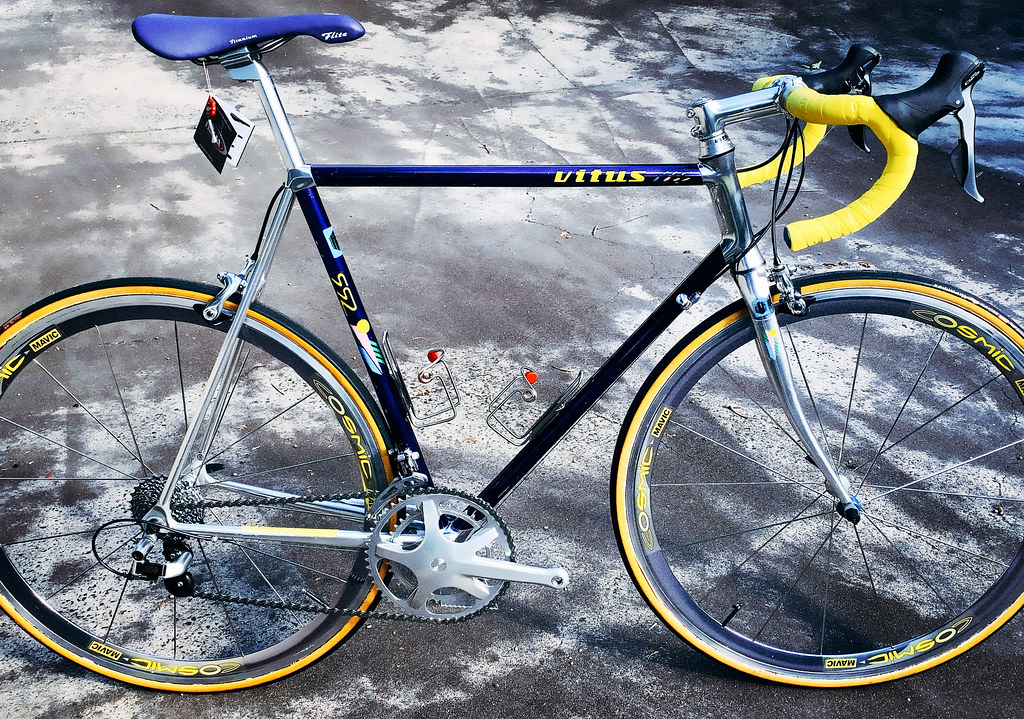 Sent from my M2101K6G using Tapatalk

Not weighed yet, but I'm guessing 9kg+!

I have a yellow Rolls saddle on the way...!
My bikes over the years
Top 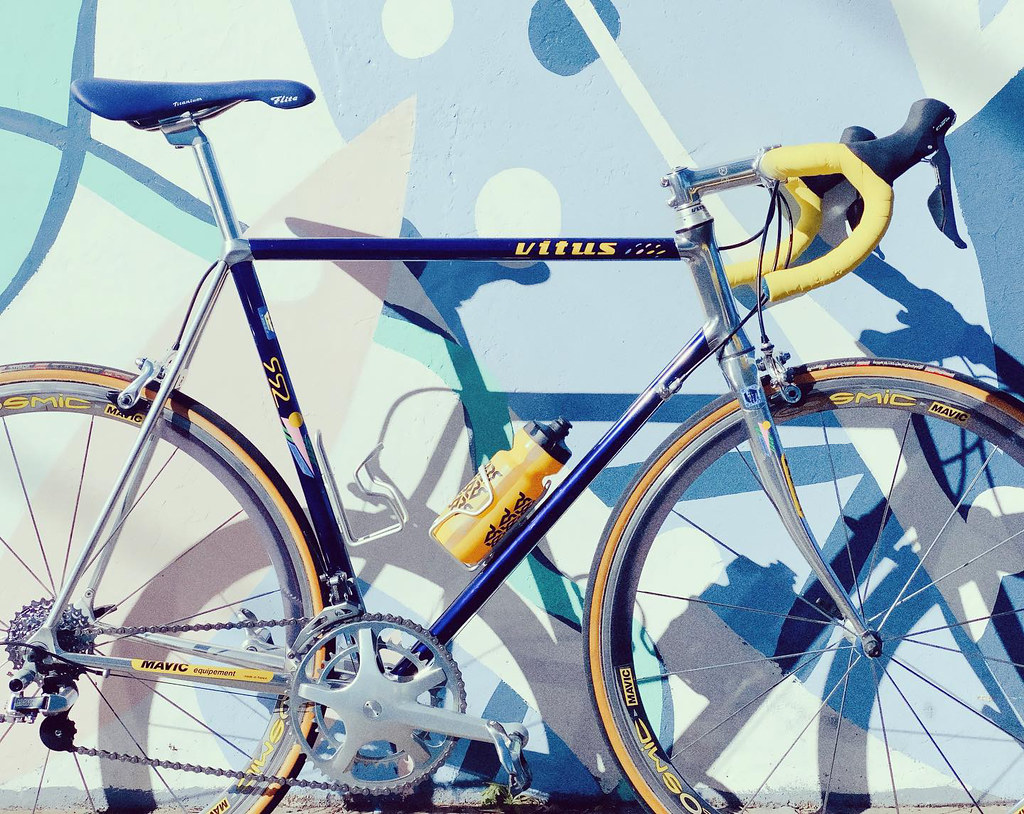