Let us know if you find a source - I suspect it's a common problem.

Nothing new on the bike, just took it to the local crits over the weekend (raced early, then watched the other categories). 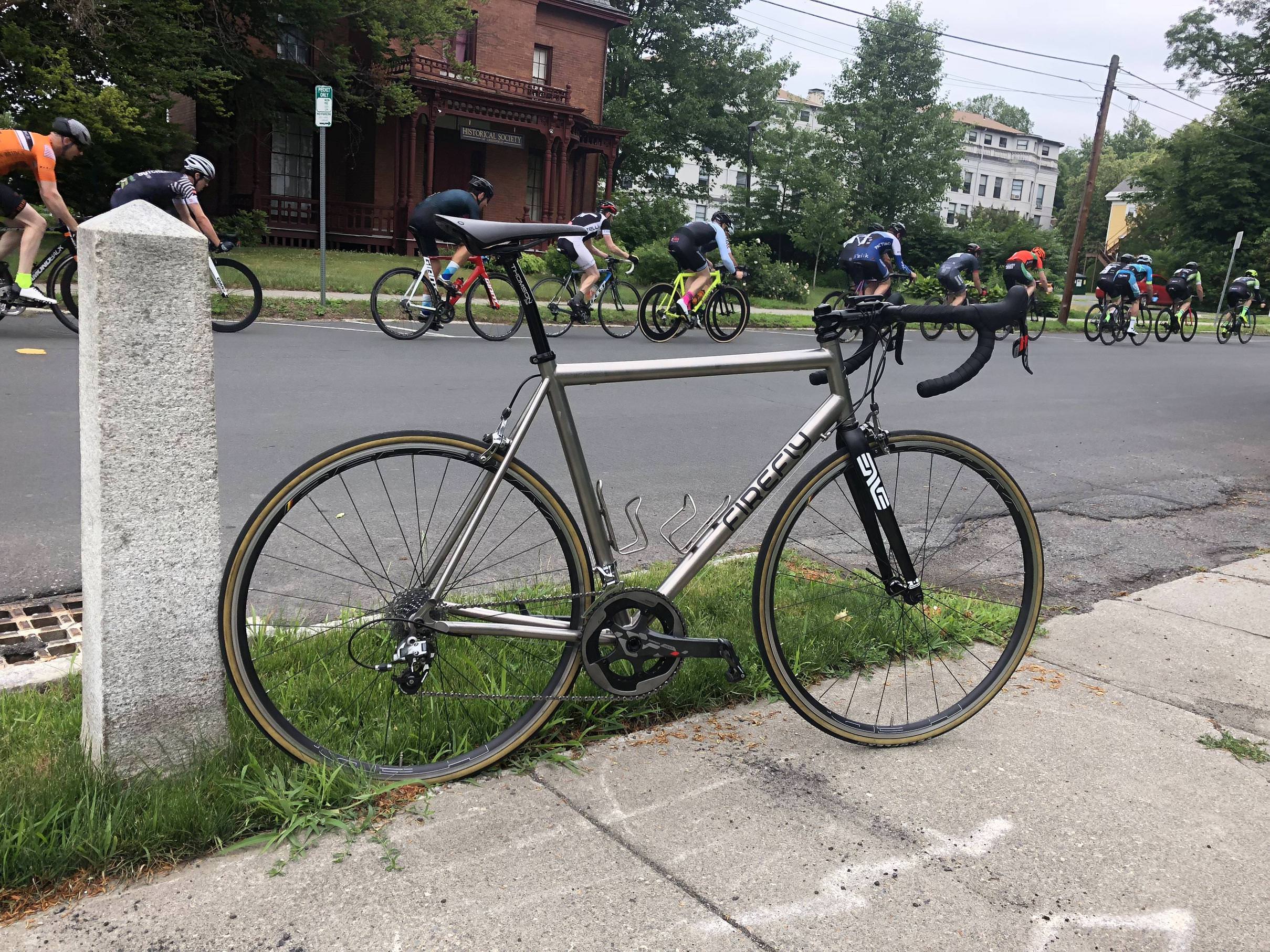 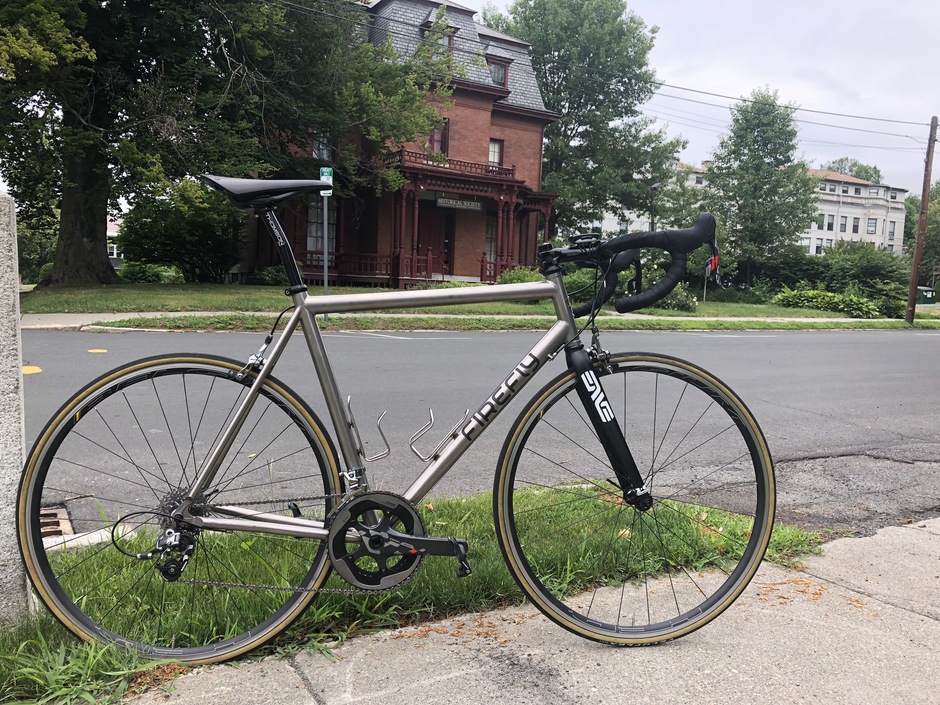 I'm in central mass, used to live in the Pioneer Valley. I have't raced in several years. Keep telling myself I should get back into cross and mtb, but haven't. I recognize some of the locations you've posted: Quabbin lookout tower, fields in Deerfield from the D2R2, and Greenfield.
Top

I'm not normally a fan of the Sram Red chain rings (except perhaps the latest etap black rings) but they suit your bike really well. Nice.
Top

Seeing RyanH's filthy new build made me feel like posting an updated build list on this thing - only a few things at this point (derailleurs, handlebars) are the same as when I bought it. A few bits have been replaced like-for-like (cassette, cables).

Got it to 16.9 lbs. but honestly, I'm a bigger guy and don't care too much about getting it lower. I have a Hylix seatpost, lighter saddle and an UNO stem in my parts bin, but the slightly heavier Thomson/Brooks option just feels better to me.

Only changes this summer have been swapping Veloflex Master 25's for Vittoria Corsa and I snapped my Barfly in the crash back in May, so for a couple months just rode with the stock mount and recently threw a cheap SRAM Quickview on. 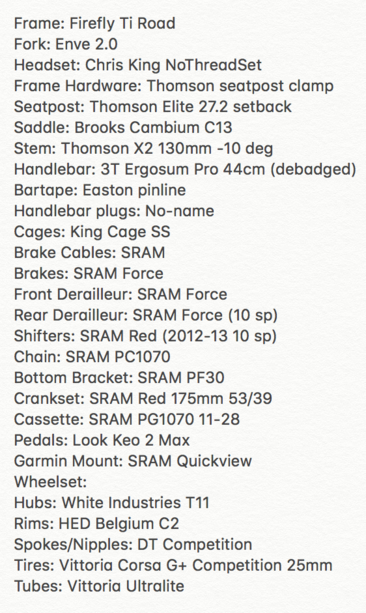 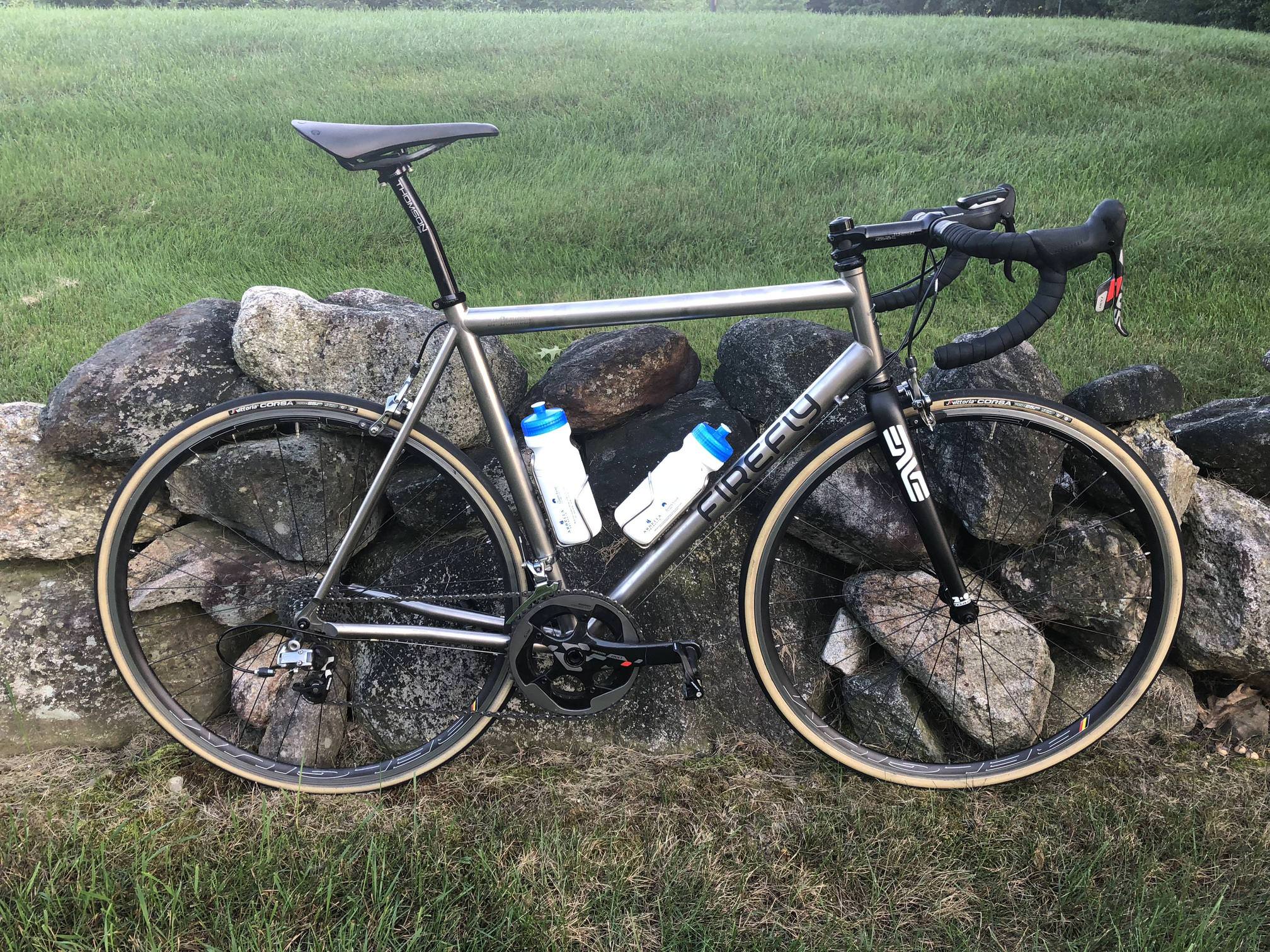 In a ridiculous act of vanity I decided to mimic a few others and see what it would look like with the Red touches "blacked out".

Stenciled, cut and applied vinyl tape to the shifters, brake levers and cranks.

I like the way it looks, but if I decide I'm noticing the feel of it too much or see any peeling I'll just go back to red. 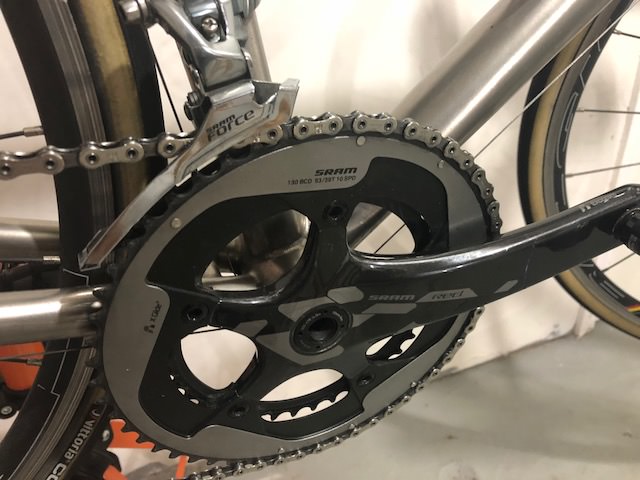 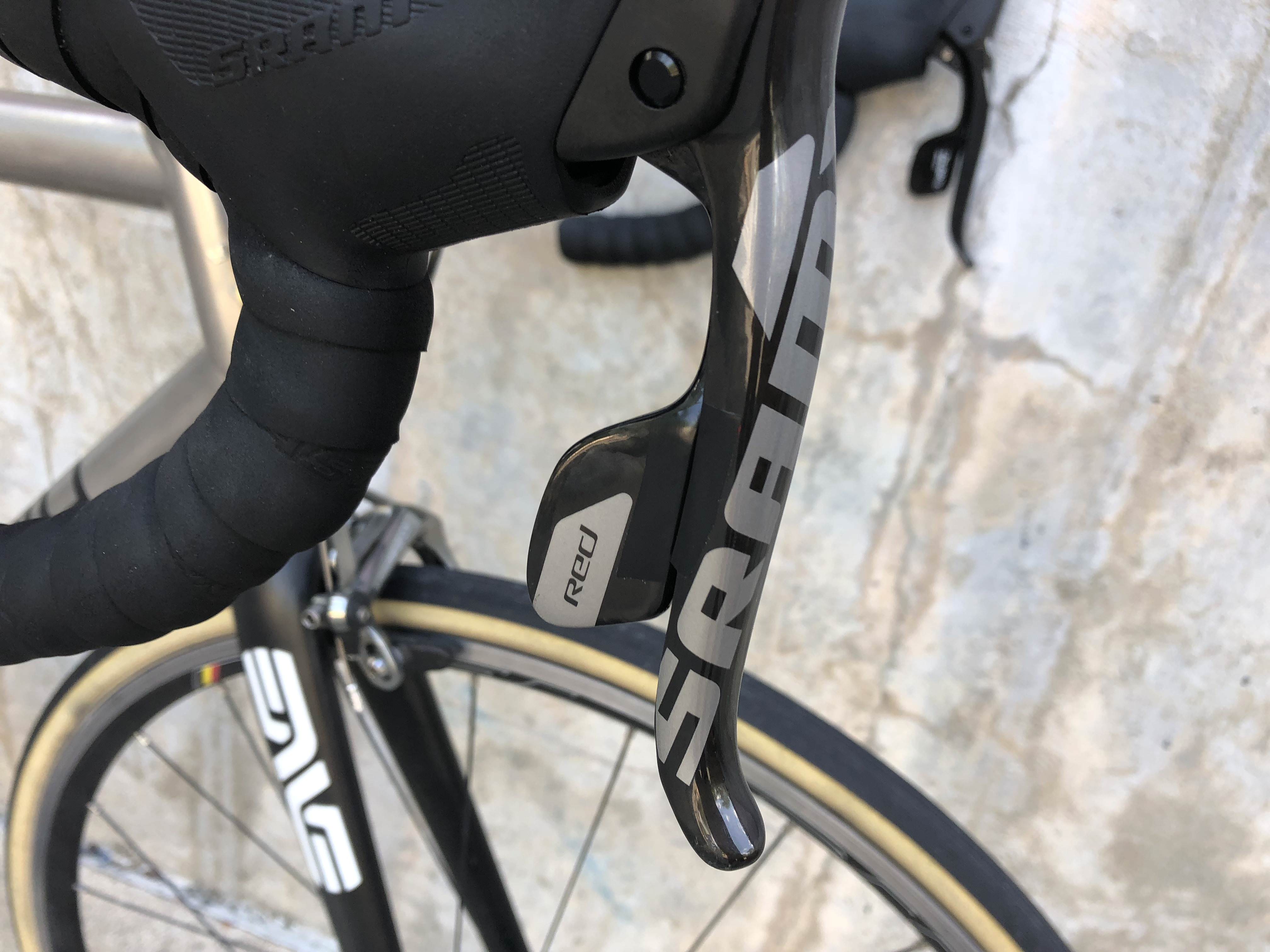 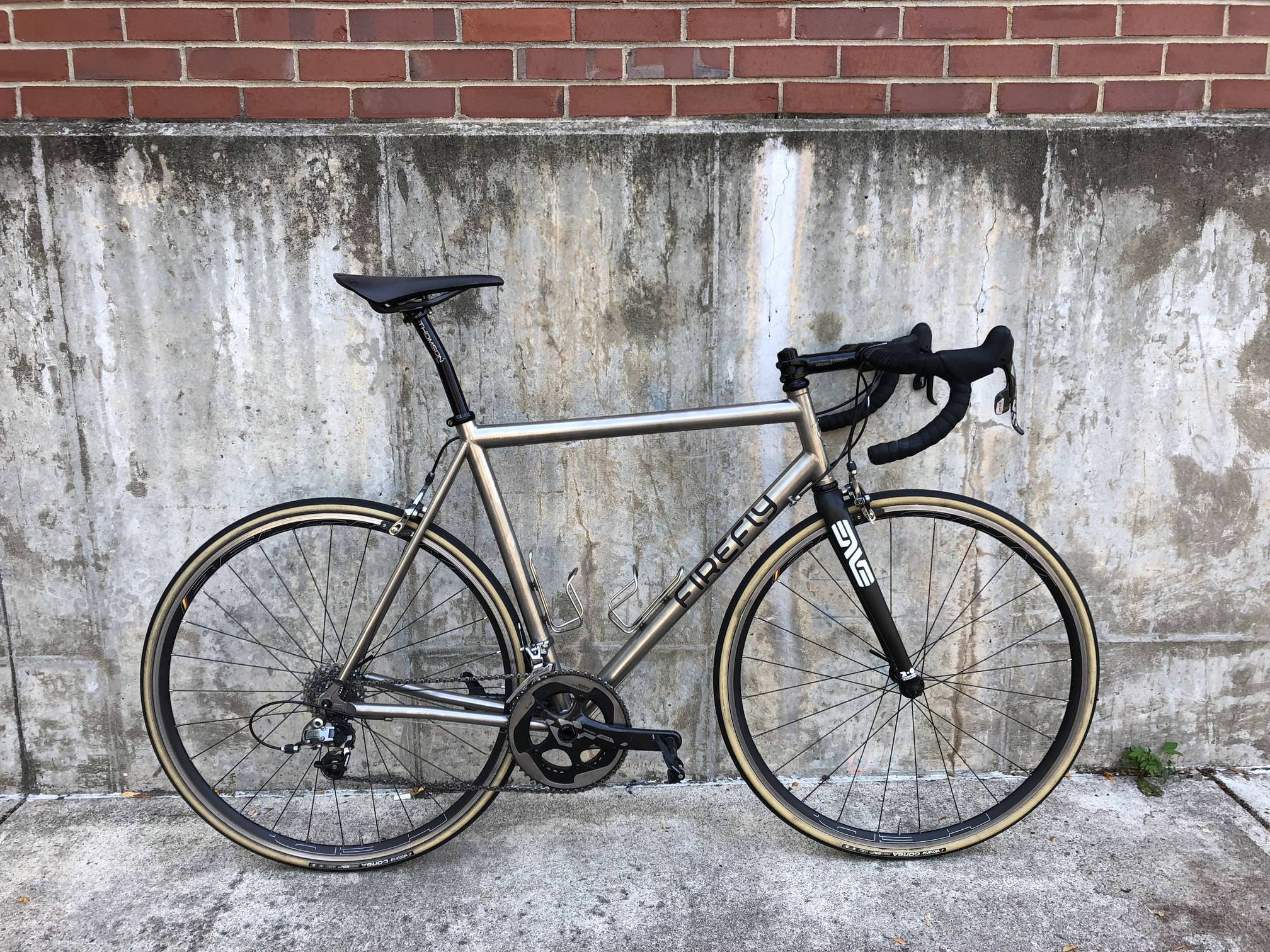 I think this is my favourite build on WW. There's just something about how understated it is that's so nice. How do the new wheels ride?
Top

MiloAS wrote: ↑
Sun Mar 31, 2019 4:18 pm
I think this is my favourite build on WW. There's just something about how understated it is that's so nice. How do the new wheels ride?

Only a few miles on them (put them on for the 1st time yesterday) but first impressions are excellent. I had the Reynolds SixtySix rims on T11's a few years back and they were quick but brutal in crosswinds. These are much more stable.
Firefly Ti Road
Top 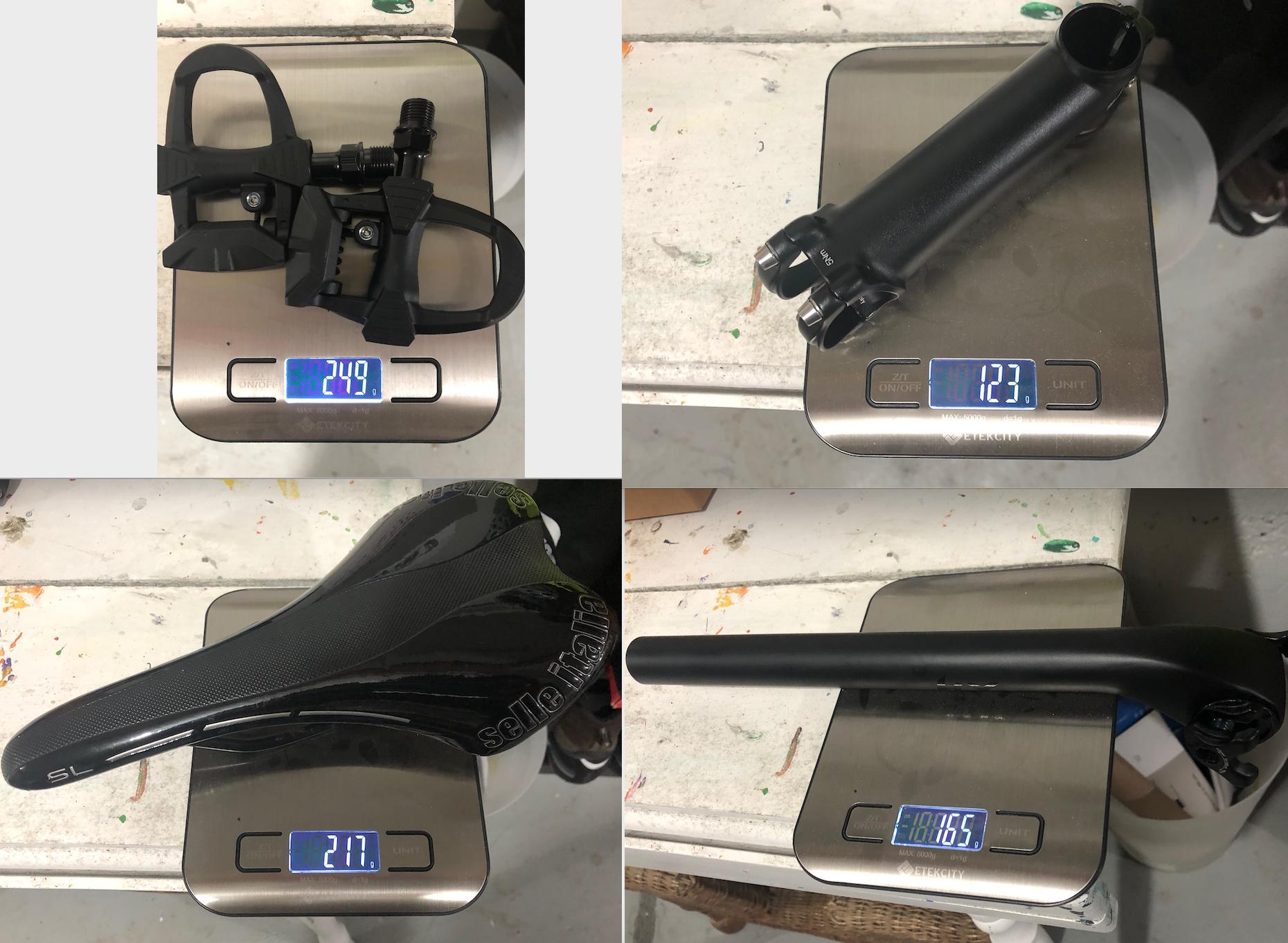 *The saddle is the one part that isn't new, it was my saddle of choice until 2016 when I changed to the Cambium. The total savings (151g) look tempting, but unless something changes my feeling on the current parts I'll likely shift these aside for a later project.
Firefly Ti Road
Top

IMO i also prefer the current set up, plus if you change you won't have matching stem + seatpost. We all know matching brands = -100g of weight
Top